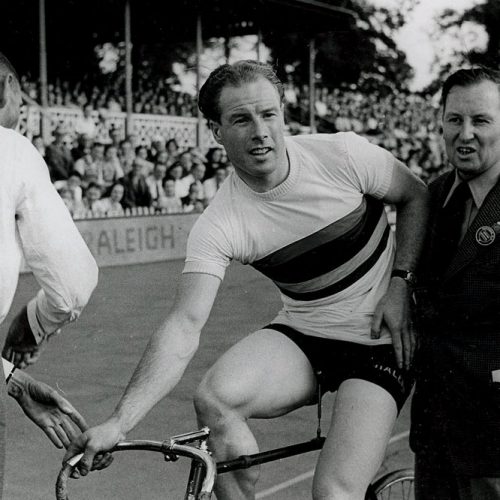 This article was kindly contributed by Robert Dineen for our 130th Anniversary Booklet. Robert is a sports journalist for The Daily Telegraph and the author of Reg Harris: The rise and fall of Britain’s greatest cyclist (Ebury Press).

One evening in autumn 1938, Elsie Hargreaves was surprised to find four young men from the Manchester Wheelers pulling up in a borrowed Standard 10 saloon car outside her modest terraced house in Bury. The smartly dressed quartet wanted to speak to her about the prospect of her 16-year-old son, Reg, leaving his local cycling club to join its more prestigious city rival. Their formality seemed odd but Elsie knew her son had talent and did not easily acquiesce to their request. “She was formidable,” wrote Jack Fletcher in his club history.

Fletcher was the senior member of the party and the Wheelers press secretary. He agreed to waive Harris’s subscription fee. It was an unusual compromise that did not sit well with the Wheelers executive committee, but they did not regret the decision to approve his membership. For the handsome quietly spoken young 18-year-old would progress to become the most successful rider ever to wear Wheelers’ red and blue and one of the finest track cycling has known.

It is difficult to overstate the impact that Reginald Hargreaves Harris had on his sport in the 1940s and 1950s. At a time when Britain had not excelled in international competition for more than two decades, he won five world sprint titles and two Olympic medals, he repeatedly broke world records and triumphed in countless high-profile races across Europe. His success and charm inspired countless young men to take up cycling and earned him a celebrity that was afforded only a handful of sportsmen in his era. In a golden age for the sport in Britain, he was its figurehead sans paraleil.

“Reg paved the way for all of us,” said Pete Brotherton an international track cyclist in the 1950s. I interviewed him for the biography I wrote about Harris. “He was the one we looked up to. He gave us confidence to go to Europe and win races – we didn’t have that before. He broke the mould.”

That he overcame such a difficult upbringing made these achievements all the more remarkable. Harris was born in the hamlet of Birtle outside Bury in 1920 when Elsie was a poor single mother. He drew his second surname from the man who would become his stepfather but the marriage only scarcely alleviated the financial burden on them. In region suffering badly from the fallout from the Great Depression, Elsie would go from house to house in Bury trying to sell her wares when money was especially scarce.

Harris left school aged 14 to take up a car-mechanic apprenticeship, yet was discharged from it for uncertain reasons, leading him eventually to seek temporary and unforgiving work in Lancashire mills. All that provided him relief was the bike that he inherited from a kindly neighbour. “I got a great kick out of it,” he said, “and soon discovered I enjoyed cycling very much.” So much so that he devoted all of his spare time to it, discovering the breadth of northern England when the sport was blossoming and you rarely struggled for a partner on the road. He became intent on cultivating his talent. ‘I developed breathing, power and explosive energy,” he said.

By the age of 16, he had won his first prize in the sports days that were organised for the families of the local community and attracted the region’s best amateur cyclists. Before long his sprinting ability was such that he had begun to make more money from pawning such rewards than he did on the production line. “It was almost like being a mini-wholesaler,” he said. “One had to be commercially minded. It was a question of selecting those occasions where the prize values were good and where one could challenge for two or three prizes in an afternoon.” 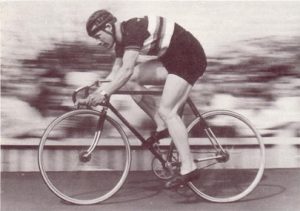 Had the Second World War not interrupted his career, Harris most likely would have conquered Britain by the end of the decade. Instead, having returned from serving a tank regiment in the deserts of North Africa, he won his first national title in 1944 and his maiden rainbow jersey three years later. Such swift success owed much to his talent but only narrowly less significant was his rare perfectionism, a quality perhaps best shown after the 1948 Olympic Games. Harris claimed two silver medals following a summer curtailed by injury yet dismissed the achievement at Herne Hill Velodrome. “Wins are remembered,” he said. “Wins are what you fight to achieve. The most important events have got to be Olympic and world title events so anything less than gold is such a disappointment that I had a token to mark the failure.”

Such ambition helped to persuade Raleigh to offer Harris a sponsorship deal that made him synonymous with the bike manufacturer long before such sportsman-brand partnerships were commonplace. It succeeded because Harris was the consummate showman: handsome, he talked well and was careful always to present an impeccable public persona, dressing impressively and often flashing his winning smile.

Soon his image was seen in adverts across the cycling and national press and on posters in the hundreds of bike shops in Britain then. The phrase “Reg rides a Raleigh” became known to everyone and helped to secure Harris’s fame. “He transcended his sport,” the cycling journalist Roger St Pierre said. “Reg was bigger than cycling. If you were throwing a big social event and you needed sportsmen. You would probably have invited Stanley Matthews, Billy Wright, say, and Reg. He was ‘A’ list.”

Raleigh commonly used a few photographs of him. One showed him in the classical sprinting pose, back arched, his enormous quad muscles flexed as he executed another brilliant finishing kick. In another he was dressed in the tweeds of the English country gentleman, with the bike beside him as if on a leisurely rural tour. Raleigh understood that Harris represented an Everyman who implied that hard work and talent could help even those Britons from the most difficult circumstances could conquer the world.

The second image appealed especially to Harris because it suggested he had fulfilled a defining ambition to climb the class system, an aspiration so pronounced that his professional rivals referred to him as “M’Lord”. As the Dutch cyclist Jan Derksen said: “‘When M’Lord rode a velodrome, he would imagine he was on horseback inspecting his land. When dressed in cycling gear inside the track, he would imagine himself in leather boots and peaked cap, surveying his estate. On his first trips abroad, he slept overnight in the back of his car, dreaming of a driveway, open fire and servants attending to him. Many people have such dreams but few are able to realise them.”

Harris actually exceeded these dreams. Partly he got rich on sponsorship but also through what he earned as part of the small band of professional sprinters who dominated the sport in Europe, choreographing as many races as not to ensure an entertaining spectacle. Through his winnings and appearance money, he bought a Cheshire estate replete with a lake, swans and horses. He owned the most expensive sports cars and a cellar of several thousand vintage wines. Like most of the “circus” of elite sprinters, he lived a playboy lifestyle, eating in the best restaurants and becoming involved with a string of beautiful women, a weakness that would cost him the first two of his three marriages.

Combined with his reserve and ruthlessness, such pursuits did not endear him to the British cycling community. In viewpoint typical of the many contemporaries of Harris whom I interviewed, Norman Sheil, the former world amateur pursuit champion, said. “You never got close to him to know him. You didn’t socialise with him. Or let me put it another way: he didn’t socialise with you. He was out of our league financially and every other way.”

He was a divisive, complex figure, and all the more fascinating for it. He remained loyal to childhood friends and family yet all but erased his Lancastrian accent. He was apparently insecure about the circumstances of his childhood yet happily mixed with the establishment. He was a student of his sport but in retirement fell bankrupt through a misguided bike business. Perhaps most crucially, he was principled yet would do almost anything to win, as shown most famously in his incredible comeback.

Few beyond cycling could believe it when, aged 54, Harris returned from the cycling wilderness to win the National Championships in 1974. Track cycling in Britain had declined dramatically and his rivals for the professional title were road specialists but it seemed incredible that a middle-aged man could outsprint them. But those inside the sport were adamant that his success owed as much to showbusiness as it did sport. Money, it seemed, was exchanged. That perhaps was not especially significant given the status of the race and track cycling then, but it did capture something about the elusiveness at the heart of Harris’s character: you never quite knew the truth about him.

As president of the British Cycling, Brian Cookson was given an office at the National Velodrome close to the brilliant bronze bust of Harris that was commissioned in his honour. Cookson described the dichotomy to his childhood hero nicely. “Reg is a huge figure,’ he said. “He deserves his iconic status. But the more that you find out about the way that he operated as a man and as an athlete, the more you find out that there were nuances to him, a pragmatic side where he was determined to make the most of his circumstances financially, and every other way. He had a businesslike, ruthless approach to his sport. Ultimately, he realised: “This is my one chance of achieving greatness.”’